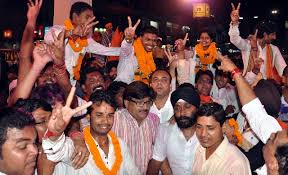 We have swept the college union elections in Chhattisgarh, held on Wednesday, by bagging over 80 per cent of posts of presidents in these institutions. Results of the union elections in the colleges, held after a gap of six years, were declared late on Wednesday night. The college union presidents have been chosen in direct elections. So far we have bagged union president posts in 125 colleges, National Students’ Union of India, students wing of the Congress, could secure 55 such posts.